The Carlisle Garden Club of MA 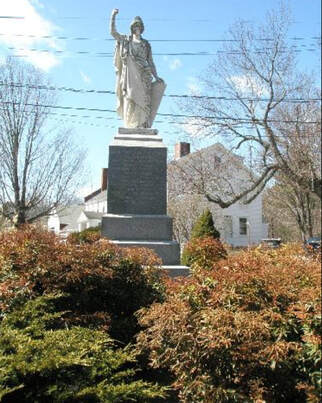 The Carlisle, MA Rotary Garden, seen above in an earlier view.
THE ROTARY GARDEN, located in the middle of Carlisle's central traffic circle on state route 225, was originally planted by the Carlisle Garden Club in 1968, with a major replanting in the 1990s. It is centrally located in the town's historic and business district, where it is highly visible to all traffic passing through town. It is a key focal point for the town's civic activities, such as the annual Old Home Day celebration which has been held for more than 100 years. A commemorative wreath is laid at this site as part of the town's annual Memorial Day observance. More recently, the space has become the centerpiece of the town Center's annual Halloween festivities, with a ring of hand-carved Jack-o-Lanterns circling the perimeter. The Garden Club's Civic Committee has added plants and maintained the garden for more than 50 years.

Plans are now underway to repave the state highway that crosses this traffic circle. As part of that update, the town will reconfigure the rotary, adding more robust curbing and traffic calming controls. At the same time, the Garden Club developed a proposal to renovate the entire garden to include site-appropriate plants for the new millenium. In September, 2019, the Club was awarded a $1,000 civic development grant from the Garden Club Federation of Massachusetts -- a 501(c)(3) non-profit that is the parent organization of our own non-profit Club.

The restoration will also be funded by recent community-wide fundraisers organized by the Garden Club, including the annual  Pumpkins on Common held in early October and an upcoming wine tasting ("Sips and Swirls") event scheduled for October 12, 2019.

A copy of the original grant proposal may be downloaded from the following links.